So let’s talk about the State Bird of Nevada, the gorgeous Mountain Bluebird!

Spring has arrived in the Carson Valley, and so have the birds. The last couple of times I have been out at the Pinyon Trail, I have been lucky enough to see some Mountain Bluebirds, and they never fail to thrill me. The adult males are bright sky-blue overall, darker on their backs.

The females are not as brightly colored, but still very pretty… 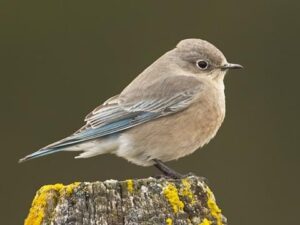 The Nevada state legislature named the mountain bluebird as the official state bird in 1967, a good call I say as they are one of the most beautiful species found in the West. That is probably why they are also the State Bird of Idaho.

They are found in meadows, orchards, high sagebrush, cottonwood and coniferous forests. They like high elevations in summer from 5,000 feet to 12,000 feet covering foothills to mountains and lowlands to desert in winter. Insects are consumed year round and in winter, the species often occurs in large flocks wandering the landscape feasting on berries, particularly those of junipers.

Nests in natural cavities in trees, old woodpecker holes, fenceposts, and birdhouses. The nests are built by both sexes with grasses and plant stems and sometimes lines with a few feathers. The male frequently feeds his mate while she is incubating and brooding. The female chooses her mate solely on the basis of the location and quality of the nesting cavity he offers her—disregarding his attributes as a singer, a flier, or a looker.

They hover lower over the ground than other bluebirds when hunting for insects.

So keep a lookout for these lovely birds when you are out enjoying our trails!

Also keep an eye out for Sandhill Cranes right now, which pass through the Carson Valley during their migration. Today I saw a pair in a field off of Centerville near Foothill. 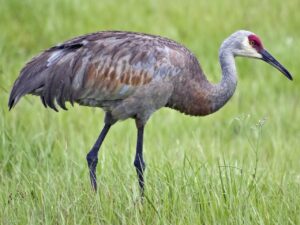 As I was hiking on the Lonesome Trail, I could hear their calls, which you can hear up to 2.5 miles away! Here is what they sound like…

The Hawks of Carson Valley